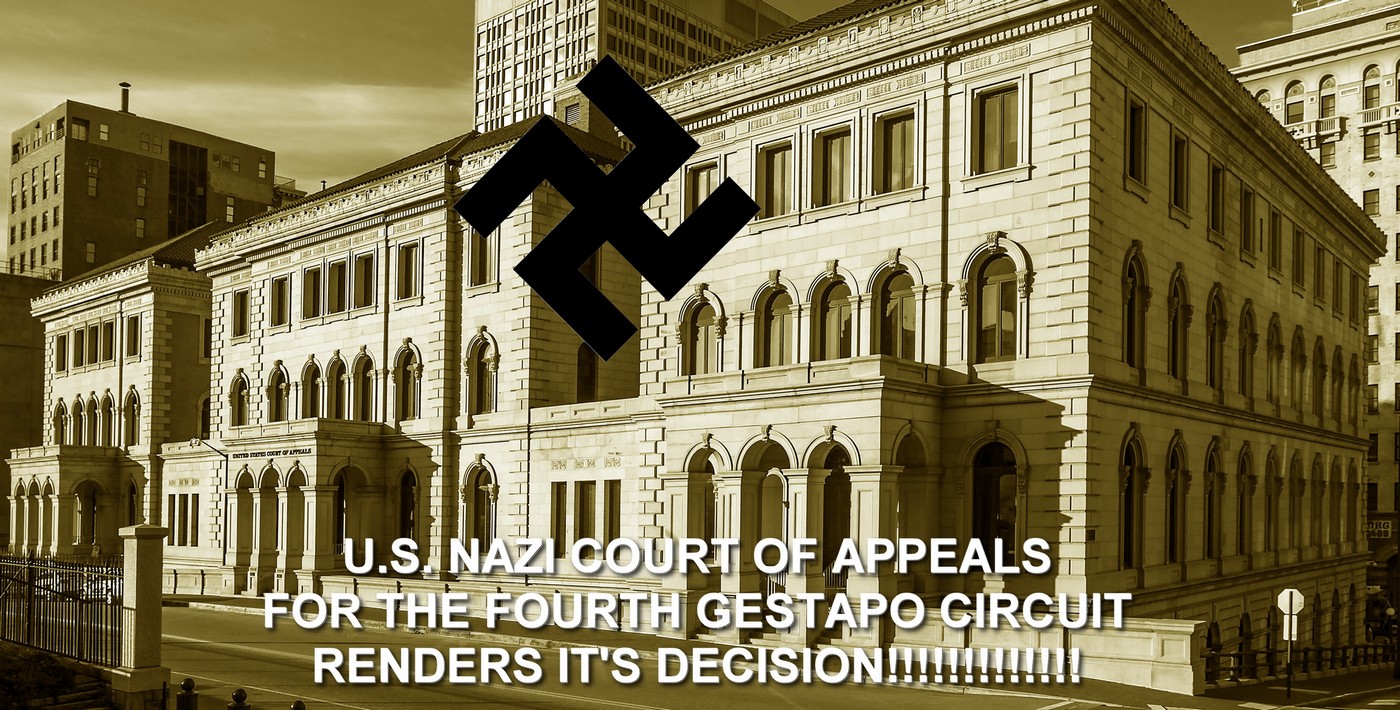 Brian D. Hill, formerly of USWGO alternative news, files his petition for rehearing in the corrupt “Fourth Circuit” “U.S. Court of Appeals”, in their bid to wrongfully dismiss his writ of habeas corpus through his 2255 motion, again citing that actual innocence overcomes any procedural bars including the one-year statute of limitations. This petition was timely filed. The opinion of this corrupt panel of appellate judges proves that they have completely ignored the very issue and the merits of Brian’s “ACTUAL INNOCENCE” claim, and their case law only replies upon the Anti-Terrorism and Effective Death Penalty Act [AEDPA] strict limitations law forbidding Brian from filing his writ of habeas corpus after one year from the final judgment of criminal conviction. However Brian filed in both his appeal brief and in his 2255 motion case that “actual innocence” is not subject to a one year time-bar. The “Fourth Circuit” judges have completely ignored Brian’s actual innocence and dismissed his appeal case by claiming it was procedurally dismissed as time barred. Then claim that they independently reviewed the record and found no reversible error. Of course they ignore or slept on the issue of the U.S. Supreme Court ruling that actual innocence overcomes procedurally barred petitions for writs of habeas corpus. This is JUDICIAL TYRANNY and Brian David Hill has proven it in his federal criminal case, and in his federal civil cases. Former Google employee and whistleblower Zach Vorhies is WRONG for defending these these corrupt federal judges by insinuating that I or Stanley write angry remarks calling these corrupt judges “fascist” and would hurt our cause. It doesn’t hurt our cause when we can prove judicial corruption, where relevant and persuasive case law is omitted when pertinent to a federal case or appeal. Brian cites those very controlling and authoritative case laws in his appeal but the “Fourth Circuit” judges do not even acknowledge that actual innocence overcomes dismissal of Brian’s habeas corpus petition by procedural defects or defaults. Brian has proven judicial corruption in the Federal Fourth Circuit Court of Appeals by each and every one of his appeal briefs.

Brian has argued that actual innocence should overcome his untimely filed writ of habeas corpus and that his proven claims of fraud upon the court should also excuse the default since it also contributed to Brian’s actual innocence claims. Brian’s case law citations are similar to what he had filed in his state appeal for dismissal of his state writ of habeas corpus, again appeal was dismissed on procedural grounds or a legal technicality of some sort in his state case too.

This is not the first time that these corrupt fascist [sorry Zach Vorhies, we are using the f-word again, FASCIST] judges of the Fourth Circuit have decided to throw out cases on erroneous grounds and ignoring the Supreme Court entirely if it is anything favorable to criminal defendant Brian David Hill, then all of it is disregarded. Even attorney Edward Ryan Kennedy of West Virginia lost Brian’s appeal because the Fourth Circuit again ignored the Supreme Court’s most recent ruling that supervised release violators should face the constitutional right to a trial by jury with the right to being acquitted upon a reasonable doubt, and that was another child pornography case but in that case he never argued actual innocence in that Haymond case but even he was given a reprieve in the Supreme Court. NOT Brian Hill though because he was set up, presumably by the deep state CIA. He will never get a reprieve by the Deep State SWAMP. Brian said that in his audio statement to U.S. President Donald J. Trump, that if Joe Biden gets in office, that Brian will never be acquitted because the “deep state will run our courts”. More likely, they are already running our courts, they are already blackmailing John Roberts the chief justice of our U.S. Supreme Court.

For the record on this campaign blog of “Justice for Brian D. Hill of USWGO Alternative News”, Brian didn’t lose any of his appeals because he wasn’t innocent, in fact he has proven a lot of good arguments and evidence regarding his innocence, he lost his appeals on stupid or incorrect reasons. Technicalities within a statute or simply things being ignored by these courts. The panels of the Fourth Circuit are thoroughly corrupted and likely blackmailed, threatened, or bribed. They are likely infiltrated. He lost his writ of habeas corpus on procedural technical grounds, they never even addressed Brian’s actual innocence in any of their short unpublished opinion. They simply just relied upon the excuse of AEDPA and said as if there is no exceptions to the one-year statute of limitations statute when there is an exception to that law. Actual innocence overcomes any procedural default for a criminal defendant procedurally defaulted in his petition and its claims. The court of appeals should be ASHAMED of themselves in the corrupt city of Richmond, Virginia, that has been infiltrated by CIA, NSA, deep state hacks in our judicial sectors of Government. Heck the CIA headquarters is in Virginia, and if the NSA is also in Virginia when there is a major reason for all of the corruption in the courts of Virginia. The deep state needs corrupt judges and justices to protect themselves from any kind of criminal prosecution or even civil liability. For the Fourth Circuit of the U.S. Court of Appeals, to ignore the actual innocence exception by the U.S. Supreme Court is uncalled for, it is unprecedented, and it demonstrates how BROKEN our federal criminal justice system really is.

The federal courts should be DISMANTLED until it is entirely reformed. This blog calls for the dismantling of the corrupt Federal Courts and that they should be revoked of their power until new Federal Courts can be created and replace every corrupt TREASONOUS FEDERAL JUDGE in our United States of America a Constitutional republic.

Remember, Brian called for Federal Judges to be tried in military tribunals for HIGH TREASON. His letter to the Defense Secretary Chris Miller outlines that the U.S. Military has the right to arrest traitors and treason committing judges or anybody in Government committing high treason when they are protected from any legal liability under our civilian laws. Civilian laws do not apply to military tribunals, and thus these judges will not be protected by sovereign immunity. Even military tribunals can act as Constitutional Article III compliant courts. The deep state may have blackmailed, threatened, compromised, or bribed our federal district court judges but they would not think about doing the same to military tribunal judges. So there is a loophole in their corrupt web of bribery, blackmail, or threats to control these judges. The military tribunals can prosecute these judges for HIGH TREASON and Sedition. It is INSURRECTION OR SEDITION for federal judges to ignore the LAW, make laws for this country, ignore the Supreme Court, and threaten anybody who stands in their way. These tyrant judges should face prosecution immediately and not a day later.

21 thoughts on “Brian D. Hill of USWGO news files the Petition for Rehearing in the Fourth Circuit US Appeals Court in dismissal of his 2255 Writ of Habeas Corpus Appeal; citing Actual Innocence – Your opinions: @LLinWood @SidneyPowell1 ?”