Directed by Brian D. Hill, released by Family. Watch this 3rd Part of of the series of this short Documentary video regarding how the frame up of Patriots with child pornography and other crimes succeed. It is through the MAFIA style PEDOPHILE RINGS who blackmail judges and officials to engage in Judicial Tyranny and HIGH TREASON. Using the corrupt mechanism of Judicial Corruption, Judicial Tyranny. Learn how patriots, activists, and alternative media are character assassinated by corrupt FBI, the corrupt DOJ, federal and state prosecutors, and the corrupt Judges. The system is fixed and designed to make the average American citizen fail in our judicial system. 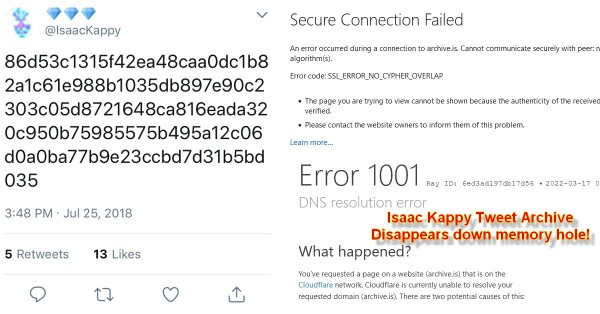 Archive.is the personal wayback machine had the only copy of a Twitter tweet page of deceased (since 2019) Issac Kappy. The website archive.is has shut down or disappeared without explanation. Luckily the deadman's code of Isaac Kappy is still alive somewhere online. The same deadman's hash for encrypted password code for the alleged child rape and murder blackmail videos, prior to Isaac Kappy being forced off a bridge, and prior to being murdered. The website has disappeared and a screenshot was captured about this issue. If the website does not come back, the deadman's hash key for the password has disappeared down the memory hole forever, at least from the link in the letter to Lin Wood. Luckily we have a printout of this hash code from Isaac Kappy. Archive.is may be gone forever, it may not be gone forever, and so here is a copy of the Isaac Kappy hash code for the password to the alleged blackmail evidence. Could it be gone forever??? Censorship??? Behind the scenes threats??? Deep State shut down of website??? We checked web.archive.org of the Isaac Kappy tweet and only one archived copy was found regarding that deleted tweet on Twitter since they had suspended the deadman Isaac Kappy's account Isaac Kappy on Twitter. It's all being purged up one side and down the other. Save this in case that copy disappears and is scrubbed off of the internet. If it does get scrubbed, they are likely coming for all copies. Beware!

Being back-stabbed by supposed-patriots like Jarrin Jackson. In his chat a group chat user was reporting witness statements on child pornography set up attempts against her and this is probably orpossibly other patriots on Telegram. I assumed that it was a targeting campaign, what else could it be? All I did was try to investigate this and make articles on the new alleged FEDERAL DEEP STATE SWAMP child porn set up plots and schemes. Instead, I get stabbed in the back figuratively possibly by Jarrin Jackson and his chat group on Telegram. I got kicked out and booted from the group for simply posting an article about the set up attacks on patriots by the Deep State Swamp. I posted in his groups in the past but never got the boot. I even made regular chat messages with other people, so I don't just post links, I am a real person. Maybe Jarrin Jackson is a FAKE PATRIOT. He is on notice about this article asking him for comment. He will be notified of this article about his group chat censoring me, Stanley Bolten. Wonder why I got booted from his group over this specific article but not over others in the past posted to his Telegram group??? This article: ALERT! WARNING! Alleged CHILD PORN SET UP ATTEMPT ON TELEGRAM USERS!!! Alleged by a Telegram user – EXCLUSIVE STORY – Justice for Brian D. Hill of USWGO Alternative News - https://justiceforuswgo.wordpress.com/2022/03/17/alert-warning-alleged-child-porn-set-up-attempt-on-telegram-users-alleged-by-a-telegram-user-exclusive-story/

The cowardly U.S. Magistrate Judge Joe L. Webster who refused to acknowledge the actual innocence claims of Brian D. Hill, formerly of USWGO Alternative News, despite his fraud on the court claims against Anand Prakash Ramaswamy, Assistant U.S. Attorney being uncontested, had labeled Brian D. Hill's blackmail scheme claims (child rape and murder blackmail videos) mirroring Attorney L. Lin Wood's Lizard Squad claims on Twitter as "delusional" and "frivolous". However, Brian Hill fights back and accuses Magistrate Joe Webster of acting in conflict of interest in violation of federal law, was biased in violation of federal law, and is making a premature fact finding regarding Attorney Lin Wood without pointing to any actual evidence or proof. IT IS GAS LIGHTING, U.S. Magistrate Judge Joe L. Webster is gaslighting rather than asking for the blackmail videos to be thoroughly investigated which was easy for him to do. Brian submitted exhibits and exhibits of evidence proving Attorney Lin Wood as a credible witness, a letter to Lin Wood about the Jeffrey Epstein blackmail videos, and acting as a protective proxy for his client's blackmail evidence and/or claims who submitted the information about the alleged blackmail video evidence to him. That information and his source's identity is protected under attorney/client privilege as Brian further argued in federal court document. Attorney Lin Wood said that he doesn't have possession of the actual alleged blackmail videos, it is highly likely the client who went to him who had the "NUCLEAR LEVEL BLACKMAIL" videos. See Lin Wood's tweet.