Some interesting tweets have come out now about the widespread Federal Judicial Corruption. It has gotten so convincing in all of their lies, fraud, junk, and abuse against criminal defendants and civil litigants are being praised by people like Zach Vorhie with his message attacking Stanley Bolten's secondary Twitter account @BenGate61221661, the former Google employee who claimed to have blown the whistle. Yes, Zach Vorhies, through Direct Messaging had criticized and ATTACKED our blog articles, and claiming that Laurie and I are being inflammatory against these nice little tyrannical Judges who have violated their oaths of office publicly in their actions and behavior.

Alex Jones again attacks the QAnon movement and having Attorney Robert Barnes, another lawyer, simply argue and claim that martial law is not constitutional, that military tribunals are not constitutional and must be done through our corrupt Federal Courts, through our corrupt Department of InJustice, and our corrupt FBI. That same Robert Barnes does not even want to represent Brian D. Hill to free him from his nightmare, no matter how much evidence we have of judicial corruption. No matter how much evidence we have of the federal prosecutor had defrauded the court and the facts of guilt are fraudulent. We have evidence from Stanley using Twitter that Robert Barnes is in the know of Brian's federal criminal case, that Alex Jones and Infowars staff did betray Brian Hill and his family, and Robert Barnes is yet another good-for-nothing tool of a lawyer all for Alex Jones and Co. who doesn't care about Brian being ruined for a crime that he never committed. They love attacking QAnon because it is competition to Alex Jone's monopoly and control over his partners, associates, allies, his patriots, and employees, like David Knight for example.

Brian D. Hill, formerly of USWGO alternative news had finally had enough of Judge Schroeder, Jackson L. Kiser, and other corrupt Judges. Brian is asking the U.S. Secretary of Defense for "high treason" charges against specific federal judges. The DisHonorable Thomas David Schroeder of Winston-Salem, NC, is one of them. Brian made a formal verbal audio request as well as a written request to the Pentagon. Another is Jackson L. Kiser, and others are listed in his formal request for military charges since Congress is so corrupt that they will not be able to impeach these corrupt judges. Last remedy for corrupt federal judges are military tribunals that can be legally used to try enemy combatants, insurrection and sedition, and high treason. It is a risky propsal by Brian but he had tried everything legally under the court system but everything has failed because the system has failed him. "You cannot fight a corrupt system with a corrupt system" as his mother Roberta Hill originally said such original quote. 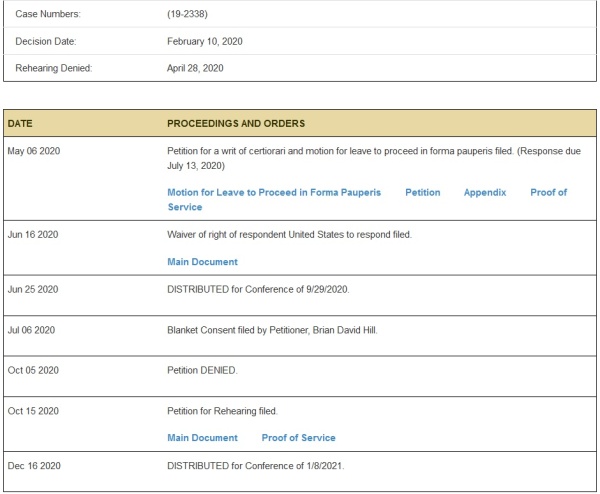 The U.S. Supreme Court had finally docketed former USWGO alternative news reporter Brian D. Hill's petition for rehearing, after two months of filing in October 15, 2020, in mid-December the filing went live and is scheduled for the next judicial conference on January 8, 2021. This is in regards to Brian's writ of mandamus for DisHonorable Judge Thomas David Schroeder refusing to act upon pending uncontested motions for sanctions at the time.

The corrupt "United States Court of appeals for the Fourth Circuit" completely dismissed former USWGO alternative news reporter Brian D. Hill's fraud upon the court ground and his actual innocence ground in his 2255 case under federal Writ of Habeas Corpus. It is a short memorandum opinion, then simply dismissed. No ruling on the actual merits, I do not believe that the corrupt "Fourth Circuit" is even reviewing over the evidence at all. The opinion being short for such a complex criminal case is very revealing that the Fourth Circuit federal court of appeals could care less about any appeal that Brian files at all. 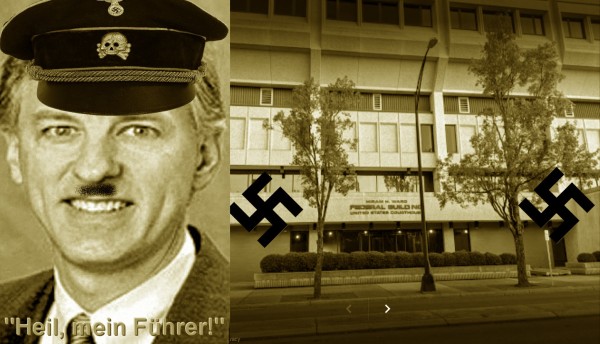 The U.S. District Court Judge of Roanoke, VA, had decided to refuse to act upon the frauds upon his court brought up by Brian D. Hill, formerly of USWGO alternative news, order that within 30 days it will be transferred back to the "Middle District of North Carolina" in front of the CORRUPT DisHonorable NAZI U.S. District Court Chief Judge Adolf Thomas David Schroeder. They all stick up for their own, even when their wrong. They don't care about fraud, the fraud might as well be all in Brian's federal case in Roanoke, Virginia, well the fraud may as well be all in Brian's probation records for everyone to see. Fraud is fraud, fraud is being allowed by this corrupt federal judge too, they are all hopeless and corrupt at this point. Why should we trust a single one of these appointed judges? They are appointed for life so they want us in prison for life. Pretty much almost every one of these appointed corrupt federal judges were appointed by globalist Presidents like George W. Bush the skull and bones President, President Bill Clinton a sexual weirdo, and other globalist puppet Presidents. Why should any of these federal judges give a crap about us peons?

General Michael Thomas Flynn was pardoned by President Donald J. Trump on November 25. President Trump declared General Flynn innocent of his charges. If President Trump can do that, he should do such for Brian D. Hill of USWGO Alternative News in my humble opinion. 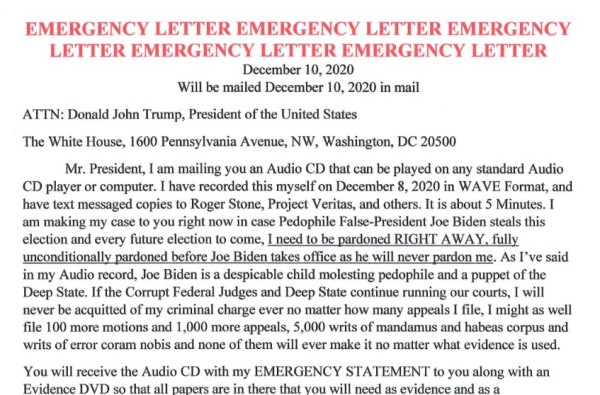 Brian's family have now uploaded some documents that show Brian D. Hill, formerly of USWGO alternative news have been mailing weekly letters, evidence, and reports to "The White House" directed to U.S. President Donald J. Trump to request that Brian receive a full pardon in his federal criminal case. The documents include a mailing log of each week of mailing, keeping an official record of all of his attempts at mailing the President of the United States.

Brian D. Hill of USWGO alternative news had recorded an audio file and had his family send us the audio file where Brian is having to contact Roger Stone and General Flynn, and even the President's son Eric Trump to try to receive a full unconditional pardon. Brian says he cannot fight the New World Order unless he is fully pardoned. He used to fight the New World Order when he ran and operated USWGO alternative news at uswgo.com. Brian says he is willing to cooperate with the U.S. military to speak before a military tribunal if necessary.