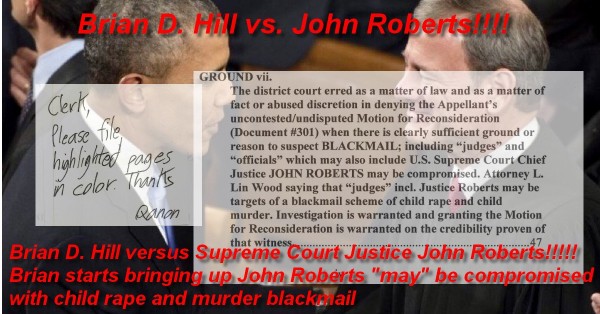 Brian D. Hill is sticking with the words "Q" or "QAnon" as Alex Jones stands on the other side as Brian's enemy. Brian D. Hill was formerly USWGO Alternative News. His appeal brief was filed by the Clerk days after being received by mail. Has a sticky note with the words "QAnon" and even went as far as starting the written/typed attacks against Supreme Court Justice John Roberts for possibly being compromised. Saying he "may" be blackmailed using Attorney Lin Wood's claims naming John Roberts last year. Brian is angry that John Roberts is compromised and has argued in appeal that John Roberts being compromised may have negatively affected his appeal in the U.S. Supreme Court. Brian is angry at John Roberts for wrecking his appeals in the U.S. Supreme Court and wants justice against John Roberts. The Clerk of the Supreme Court factually covered up emergency motions for leave of court, those were never docketed which caused all SCOTUS petitions to have failed by being dismissed. Brian suspects John Roberts may be responsible for the Clerk violating federal law by refusing to file his emergency motions. Supreme Court Chief Justice John Roberts is Brian's enemy NOW. Brian plans on demanding his recusal from any further involvement in his case.

Is justice finally being done??? Former news reporter of USWGO Alternative News; Brian D. Hill's 2255 Motion filed in Federal Court months ago was not responded to by the U.S. Attorney Office by the deadline of May 1, 2022 as ordered by the U.S. District Court. This 2255 Motion case had a "GROUND VII" where Brian suspected or feared that the Federal Judges involved in his case may have been blackmailed with child rape and murder. That information filed with the Federal Court from the Middle District of North Carolina with exhibits of printouts sourced from Radiopatriot.net, and Attorney L. Lin Wood. A printout was used in legal exhibit of the article: Lin Wood re: Isaac Kappy’s discovery of pedo blackmail tapes | The Radio Patriot (was Exhibit 6). Exhibit 6 of motion to reconsider which was not contested by the Government either.

The narrator brings up the timeline on how Brian D. Hill, formerly of USWGO Alternative News got framed and set up by the Deep State Swamp minions.

Now we are receiving more attacks, likely by the Biden DOJ -- Department of INJUSTICE. For six years I have never been accused of abuse or fraud by ProtonMail. Even Attorney Lin Wood and Tracy Beanz takes interest in the emails we send out about the information war against the deep state pedophile Federal Judges and corrupt DOJ Federal prosecutor demon Anand Prakash Ramaswamy. ProtonMail disables me sending emails telling me "Message sending disabled due to abuse or fraud". There are a few suspects of who reported StanleyBolten@protonmail.com for committing the HEINOUS ACT OF EXERCISING FREE SPEECH. It may be Anand Prakash Ramaswamy of the Middle District of North Carolina U.S. Attorney Office or John Alsup of the Middle District of North Carolina U.S. Attorney Office. We may be under CIA or NSA or U.S. Attorney coordinated Deep State Assault campaign against us!!!!!!!!!! They are out to get us after the critique email as well as the two latest articles we typed up: (1) The USWGO Federal Court case archives are now available on Mega, Mediafire, and Google Drive for your convenience, as far as April 23, 2022, archives of Hill v. USA – Justice for Brian D. Hill of USWGO Alternative News; (2) Dishonorable Judge Joe Webster disregards all evidence; disregards credibility of Attorney L. Lin Wood not being delusional – U.S. Attorney Asst. Ramaswamy may lie about Br 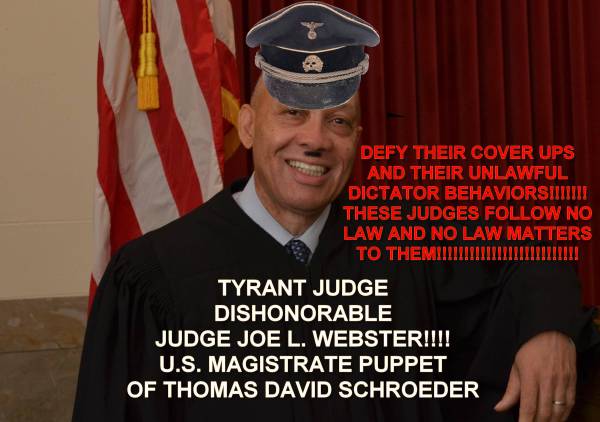 Now download the Federal Court archives of Brian David Hill v. United States of America as of April 23, 2022. Grab them all and share them on Bittorrent before the corrupt Federal Judges come for our throats at some point and eliminates our website and covers up the Federal Court documents. We fear that the evil demon U.S. Attorney asst. Anand Prakash Ramaswamy may push for another motion for a pre-filing injunction like in 2018, and push to cover up and destroy all evidence proving Brian D. Hill of USWGO Alternative News innocent of child porn, and the frame up set up scheme by USPO Kristy L. Burton of Danville., Virginia or the higher ups by bullying Brian into having an autism meltdown. Then the state charge set up operation caused by both Carbon Monoxide poisoning and a man in a hoodie threatening to kill Brian's mother Roberta Hill, back in 2018. Now they may move to cover up and lie about Brian Hill and his whole family. They lied about attorney Susan Basko and will lie about attorney L. Lin Wood. They will all be lied about by this demon Anand Prakash Ramaswamy. Don't let them cover up his case files. Don't let them succeed and DEFY THESE LAW-DISOBEYING FEDERAL JUDGES. These Federal Judges don't follow any law anymore, they don't even follow the Supreme Court, they think they are gods, they don't even follow or enforce their own local rules because they are OUT TO GET Brian Hill if they cannot have him killed in their jails by withholding of insulin. Defy their illegal Court Orders to censor and destroy evidence. Do not let them get away with this. Defy them now before they even enter their corrupt unlawful unconstitutional dictatorial orders by the demon Anand Prakash Ramaswamy. Defy them by DOWNLOADING THEM NOW, DOWNLOAD THE CASE FILES NOW!!!!!!!!!!!!!!!! Do not wait for their minions with guns and terror, the corrupt U.S. Marshals under Pedophile Dictator Joe Biden. Now is the time to download the case files and share them on BitTorrent and other P2P file sharing websites and networks before they come for this website and other websites, Do not let the Feds make it disappear.

The corrupt U.S. Magistrate Judge Joe L. Webster gets even more worse than before. Not only has he labeled the Brian's Hill's fears and suspicions mirroring Lin Wood blackmail claims as "delusional" and "frivolous" basically insulting this attorney as just an "attorney from Georgia", he being a lazy tyrant had his law clerk deny (through two simple text orders) Brian's uncontested motion to reconsider and asking for an extension of time for the U.S. Attorney to respond to Brian's 2255 motion. That is Brian D. Hill, formerly of USWGO Alternative News. Judicial tyranny from this puppet minion of Dishonorable Judge Thomas David Schroeder. Thomas Schroeder appointed by George W. Bush who is a Skull and Bones ex President of the USA.

Now we assume that it was Anonymous back in 2013 because of the guy using a text to speech generated voice and the V-for-Vendetta Guy Fawkes mask. Anyways, somebody who appeared to have been "Anonymous" and did not use his real voice had uploaded a video on YouTube publicly supporting Brian D. Hill, the former news reporter of USWGO Alternative News who was framed and thrown into a constitutional crisis by the corrupt Federal Courts. See the link: https://www.youtube.com/watch?v=limjvzp2TCs 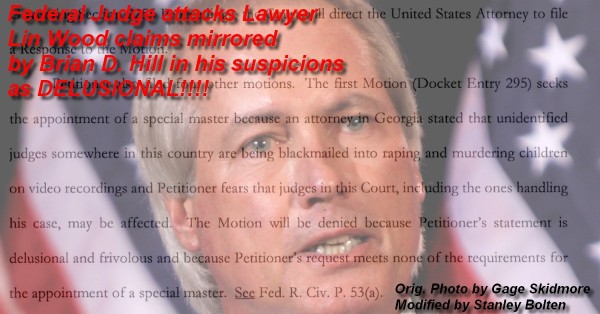 Brian D. Hill, formerly USWGO Alternative News had filed his appeal brief opposing U.S. Magistrate Judge Joe L. Webster (Durham, NC Federal Courthouse) claiming that Brian's fears of judicial blackmail mirroring the tweets of Attorney L. Lin Wood claims of "child rape" and "murder" blackmail videos concerning judges and politicians was labeled by a Court order as entirely "delusional" and "frivolous". However, the U.S. Attorney had 21 days to respond to Brian's "MOTION TO RECONSIDER" that Judge's order but they did not respond. They did not contest or dispute the additional evidence regarding the credibility of Lin Wood. As well as a copy of Brian's fax to Lin Wood dated January 20, 2021. Brian's claims of Lin Wood's credibility were undisputed, uncontested, as a matter of law under Local Rule 7.3(f) & (k).