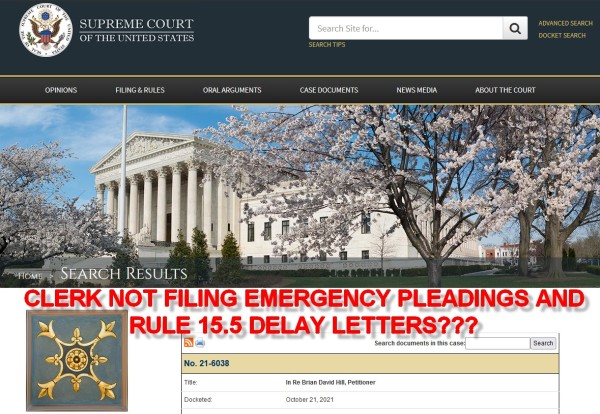 The Admin of Justice for Brian D. Hill of USWGO Alternative News has emailed the U.S. Supreme Court's office of the Public Information Officer, informing them that if the Clerk's Office play the dirty games then the U.S. Congress will be informed of this and the Clerk had violated 18 U.S. Code § 2071. The dirty games and trickery of throwing out Brian's three petitions while refusing to delay the Conference for his three cases and refusing to file Brian's EMERGENCY MOTIONS FOR LEAVE OF COURT to compel the U.S. Solicitor General Elizabeth Prelogar to respond or file an opposition brief.

My email to U.S. Solicitor General Elizabeth Prelogar today is clear in response to the Solicitor General's waiver of responding. That is in the trio of U.S. Supreme Court petitions of Brian D. Hill, the former news reporter of USWGO Alternative News. That if the Solicitor General attempts to do anything to throw out Brian's petitions, then they are just as guilty of "fraud, aiding and abetting destruction of evidence, aiding and abetting perjury, aiding and abetting all federal crimes committed by the U.S. Attorney Office in Greensboro, NC." The warning is clear to the Corrupt U.S. Department of Justice. They are guilty of manufacturing evidence against Brian David Hill of USWGO Alternative News to retaliate against Brian D. Hill and shut him up forever and even trying to get him to kill himself. They failed. The Department of Justice should be arrested for planting child porn or allowing the State Bureau of Investigation to plant child porn and then provide manufactured evidence to the Corrupt U.S. Attorney Office of Greensboro, North Carolina. This is not the first time that the State Bureau of Investigation in North Carolina had manufactured evidence to obtain favorable criminal convictions in the Court system. They manufactured evidence in a murder case against Dr. Kirk Turner for a case which was a clear self defense. The same SBI who framed Dr. Kirk Turner for a murder charge had framed Brian D. Hill with child pornography, IT IS A FACT. Uncontested, undisputed FACT.

Brian D. Hill, formerly of USWGO Alternative News and his family/friends legal team have fought hard to make sure that Brian's Supreme Court trio petitions are not thrown out of the Supreme Court, at least not disposed of until the Corrupt Judges and U.S. Solicitor General Elizabeth B. Prelogar files a proper response or opposition brief as Brian had argued before his emergency Motions. His emergency motions cover all three of his Supreme Court cases including his Mandamus action.

Brian D. Hill, formerly of USWGO Alternative News took the initiative to compel the U.S. Solicitor General's office and the Corrupt Federal Judges incl. Chief Judge Thomas David SSchroeder and William Lindsey Osteen Junior to file a response in opposition to his trio of U.S. Supreme Court petitions requesting vacatur of his criminal conviction or acquittal or both. The acting U.S. Solicitor General Brian Fletcher had filed the standard usual waivers of response in all three of Brian's petitions hoping that all of Brian's trio petitions would all be denied by the Justices of the Supreme Court.

Today, the U.S. Supreme Court had docketed the trio of petitions filed by Brian D. Hill , formerly of USWGO Alternative News. Trio of petitions asserting that the U.S. Court of Appeals for the Fourth Circuit and the U.S. District Court in Greensboro/Winston-Salem, North Carolina had inappropriately refused to follow the case law precedents set by the Supreme Court. The case law authorities such as the Constitutional right to a Jury Trial for supervised release violators who are charged and accused but not yet convicted of a supervised release violation. Constitutional rights such as the inherit powers of Federal Courts to vacate fraudulent begotten judgments when a judgment is grounded upon fraud. Constitutional rights such as the right to prove factual innocence to a criminal conviction that your actually innocent of. That the Anti-Terrorism and Effective Death Penalty Act shall not abate actual innocence claims. All of that had been docketed today, on October 21, 2021. All were considered filed on October 8, 2021, because that was the date when the UPS label was generated by Roberta Hill, Brian's mother. All three petitions were mailed in the same box with the USWGO Logo affixed to the box with the words: "JUSTICEFORUSWGO.WORDPRESS.COM – GOD – JESUS – COUNTRY – JUSTICE – FREEDOM – LIBERTY – NO CORRUPTION". 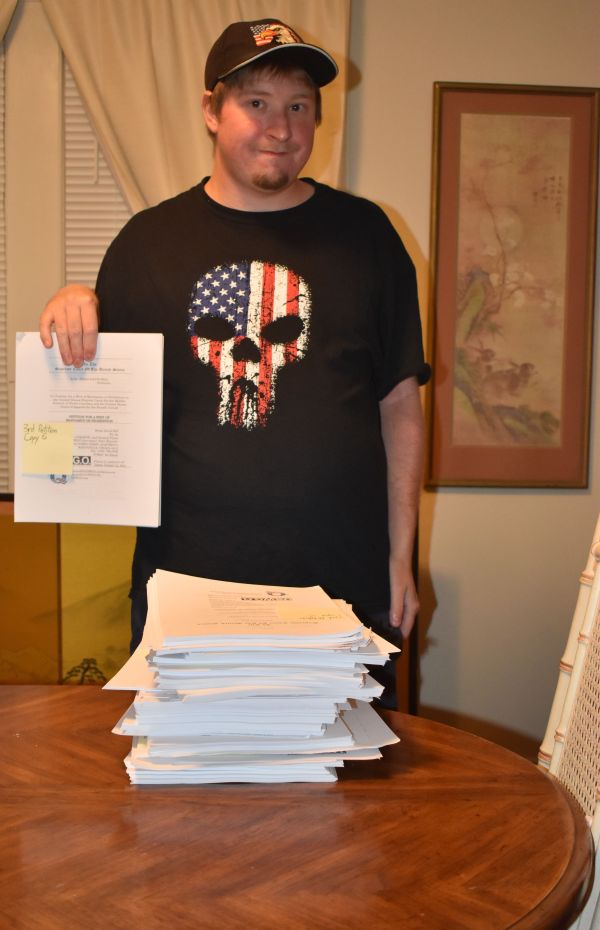 Brian D. Hill, formerly of USWGO Alternative News (after he was framed on August 28, 2012 in the Town of Mayodan) has filed three/trio Petitions within the U.S. Supreme Court to throw out the null and void criminal judgments in Brian's Federal criminal case. Not just that but is pushing the SCOTUS to curtail the U.S. Attorney's repeated pattern of fraud on the court under it's leading assistant U.S. Attorney Anand Prakash Ramaswamy of the Middle District of North Carolina.

The U.S. (Federal) Court of Appeals for the Fourth Circuit in Richmond, Virginia has totally IGNORED THE LAW, they have ignored the laws of the Court and laws of SCOTUS. They just threw out Brian D. Hill of USWGO Alternative News's three remaining Federal Appeals. Two appeals were consolidated into one in his Writ of Habeas Corpus denial appeal (2255 motion). They threw both of them out without an opinion, without comment, denying both Petitions for Rehearing, on the date of August 17, 2021. Anybody reading this article should get this out to every lawyer, to every single person who may be ignorant about the Federal Court System and how corrupt it truly is. This was never about what crime they had originally charged Brian with. This was about the Obama Administration or any other Cabal associate getting revenge on Brian for operating USWGO Alternative News from 2009 to 2012, and/or for defeating Righthaven LLC by not settling with them until they knew they had no standing to have ever sued and folded. It is clear as day that this is about revenge. When Judges ignore the laws when favorable to Brian Hill who was charged with a crime in 2013, then the Judges are not following the law. They disagree with a law and not follow it and not rule a law unconstitutional but just simply refuses to enforce any law favorable to Brian the criminal defendant, then that is TREASON OF THE HIGHEST ORDER.

The Corrupt Middle District of North Carolina and Corrupt Fourth Circuit U.S. Court of Appeals in Richmond, VA continue stalling all Federal criminal and civil appeals after Brian D. Hill, formerly of USWGO Alternative News had accused any or all Judges involved in his cases of raping kids and being videotaped doing such behavior and being blackmailed with such behavior, citing Lin Wood's statements in January, 2021. 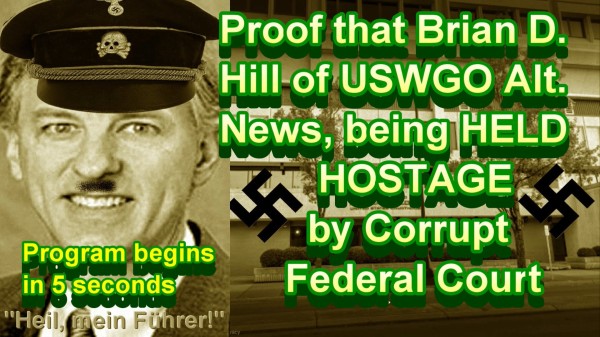 The corrupt Federal Judge Thomas David Schroeder, Middle District of North Carolina had denied uncontested motions which would have ended the illegal fraudulent criminal sentence of Brian D. Hill, formerly of USWGO Alternative News. Brian is ACTUALLY INNOCENT and had been proven with the uncontested motions of Brian's actual innocence. It may take a lot of time to review over the Federal Pleadings but all prove Brian's innocence. Brian was entitled to remedy and relief as a matter of law aka Local Rule 7.3 and Due Process Clause. Even the U.S. Supreme Court said Actual Innocence overcomes procedural time bars. Fraud on the Court and proven fraud perpetuated by the U.S. Attorney Office which are Government lawyers mean that Brian David Hill is innocent of his charge possession of child pornography.

the source. Ever since those allegations were brought up, his Federal and State criminal cases have stalled without explanation, no judicial decisions are being made at this time, whatever the case may be. Bringing forth allegations that Judges involved in Brian's criminal and/or civil cases may have done heinous acts such as raping kids and being videotaping doing such heinous acts, and those type allegations of a criminal nature regarding our Judges in our Courts would cause an internal investigation if not FBI and DOJ investigations if the source is credible. Even informed his Probation Officer of the blackmail and a possible suspect of who may have the motive to frame Brian with child porn to ruin his character with character assassination or the child porn set up may have been a revenge plot against Brian in 2012 over something of Brian having evidence in 2012 against somebody in regards to something involving Brian, but Brian is not at liberty to bring up the suspect's name until he/she has been charged and convicted in Court in the future. The only Court not stalling Brian's case is the U.S. Supreme Court unless allegations of child rape and murder are made against the Justices of SCOTUS. The letters not being released are not being released in case the Feds want this kept secret or prefer that it be kept secret until all matters are sorted out. This may be good news for Brian depending on if our suspicions are true, and Brian's suspicions are proven true.