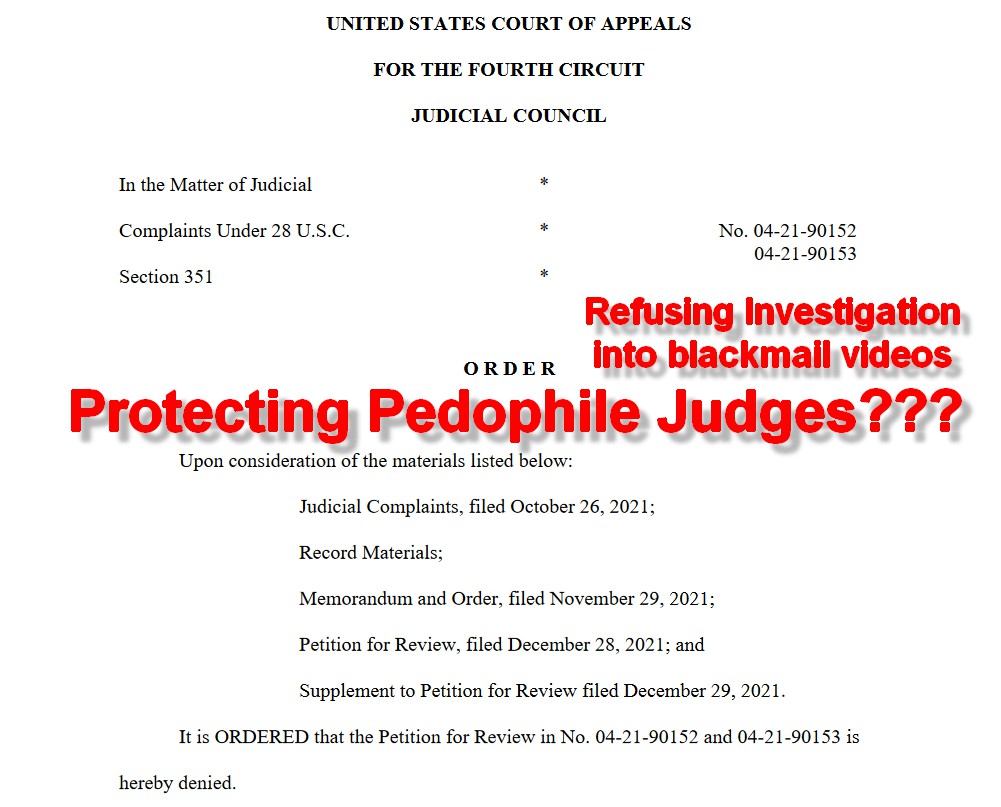 U.S. Court of Appeals, Judicial Council of the Fourth Circuit had made the grave mistake of dismissing and denying the entire Judicial complaint by Brian D. Hill, formerly of USWGO Alternative News, without verifying the identities of the child rape and murder blackmail videos alleged by Attorney L. Lin Wood. They dismissed and denied the Petition for Review asking to reopen the complaint and review over each and every child snuff blackmail videos to confirm the identities of those in the child rape blackmail videos. Asking to thoroughly investigate before making a disposition. They refused. They will forever be known as the “Pedophile Protectors” of the Fourth Circuit of Federal Courts.

A letter was filed with Secretary James Ishida as documented, warning him for his children, his grandchildren, and the children of America, that he needed to WAKE UP and protect the children by having investigators of the Judicial Council determine which Federal Judges have allegedly raped children in the blackmail videos alleged by Attorney L. Lin Wood. Warning him that the entire Judicial Council would be aiding and abetting the child rape and murder if they refused to investigate. They are culpable now, just as guilty as the alleged pedophile Federal Judges themselves. Also see the Petition for Review.

This is unacceptable. They made this decision quickly without conducting any thorough investigation. They did not subpoena Attorney Lin Wood, they did not subpoena the jailed members of The Lizard Squad. See http://web.archive.org/web/20210104073018/https://twitter.com/LLinWood/status/1345995391981019136. They did not ask questions. They didn’t even admit to ever contacting Attorney Lin Wood and Lin Wood has not confirmed whether he was even contacted or not by any investigator for the Judicial Council. The blackmail videos will remain as they are, just sitting there rotting in the dirt as if it is not important to protect the children from the rich and powerful pedophiles. This is scary. The Fourth Circuit has shown it’s true colors.

The Fourth Circuit had made their decision. It’s okay to ignore the law, violate the law. It is okay to disregard the law. Play like they are the tough on crime heroes but in reality they protect the child rapists within their ranks. This statement, all statements in this article can be made without reservation, without fear of a defamation suit, because they could have conducted a thorough investigation into the Lizard Squad hacked blackmail videos of child rape and child murder. Instead they played politics and mind games and gaslighting. They protected real serial pedophiles like Andre Haymond who got sympathy in the U.S. Supreme Court but not innocent man Brian D. Hill.

The Fourth Circuit has sunk to a new low, they ARE PROTECTING CHILD MOLESTERS AND CHILD RAPISTS AND CHILD MURDERERS. I CANNOT BELIEVE THIS S#*T. They are as evil as the Catholic Church corrupt minions who protect the pedophile priests.

Here is a except of the letter to Secretary James Ishida, he knew he is in the wrong here for allowing the Judicial Council to protect the Pedophile Federal Judges. There are Pedophile Federal Judges. We may not be able to prove their names of which exact Judges are raping kids, but we know they are in there by the actions of the Judicial Council rendered on January 4, 2022. The Lizard Squad knows which Federal Judges raped kids. Isaac Kappy and famous American Actor who mysteriously was murdered after being forced off a bridge, he knew which Federal Judges were raping kids if he had ever watched any of the videos. It is time to arrest the entire Judicial Council of the Fourth Circuit for permitting child rape and murder which are heinous federal sex crimes and state sex crimes. They are protecting the abusers. They are just as culpable as the Federal Judges who may be raping kids in their respective Fourth Circuit districts. They are an accessory after the fact, they are committing crimes such as MISPRISION OF A FELONY.

What can you expect, we have a Pedophile IN THE WHITE HOUSE in the Executive Branch of the United States of America who runs the Federau Bureau of Investigation and the Department of Justice. Joe Biden the Pedophile President with his Pedophile son Hunter Biden.

They were warned and they did not take heed of any legal warnings.

I do sincerely ask for an investigation and review into the blackmail videotapes or digital video recordings. It needs to be looked at, you do not need to turn away from this. None of the members of the Judicial Council need to turn away from this. The Canons of Judicial Conduct must be entirely followed. The laws must be followed. Under 18 U.S.C. § 4 and Article III requiring judges exhibit good behavior while in office, it is your Council’s duty to take action and it is your sole responsibility to take action. It is your duty and responsibility, or forward it to a competent Law Enforcement Agency to take action when it is their duty as Law Enforcement to take action. It needs to be done instead of dismissing the complaint and deciding to do nothing about it. Those who had the ability to take action but decide not to do anything about it, it will lead our Courts into ruin. The Judges must be investigated and if they are in the child rape videos, then if they are in any of those videos then they must resign or be arrested “for the children”, for the children, for the children. FOR THE CHILDREN. If you care about your children and want them to have a future, we must protect the children even if it is not your children. We cannot let this just sit and be ignored. Your Court System is not supposed to be like the Catholic Church who cover up the sexual abuses to protect the reputation of the clergy.

Page one of Letter to Secretary James Ishida dated December 29, 2021.

What a shameful display of judicial B**lS#*t. They are probably pedophiles. We must assume that they have control of the Judicial Councils as well.

Also Lin Wood had made claims that Chief Justice John Roberts of the U.S. Supreme Court is a child rapist. Claimed on Twitter. He has jurisdiction being assigned over the Fourth Circuit. The proof is on their website that John Roberts is assigned over the “Fourth Circuit”. Pedophiles protect each other in the corrupt offices of the United States Government. See https://web.archive.org/web/20220107062459/https://www.supremecourt.gov/about/circuitassignments.aspx

The Fourth Circuit Judicial Council will forevermore be known as Pedophile Protectors. The entire Fourth Circuit is corrupt and probably filled with pedophile Judges. Time to investigate them all and consider arresting them all.