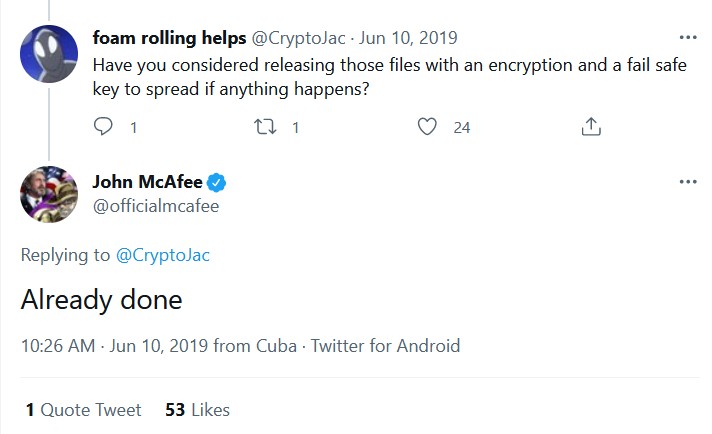 In January, 2021, Attorney L. Lin Wood bragged about having a copy of the blackmail video materials originally from the U.S. Intelligence Agencies encrypted by a password exposing that politicians and judges are being blackmailed with child rape and murder. John McAfee managed to get Terabytes [TB] of DATA compromising the U.S. Government. Also said on Twitter from his official account that he had it encrypted with a password or key and had already shared it with others with a fail-safe key before his “supposed suicide” in June, 2021. Did John McAfee provide all of that compromising DATA collected by McAfee against the CORRUPT United States Government and its corrupt criminal actors to Attorney L. Lin Wood before John McAfee died in Jail???

Both Attorney L. Lin Wood and John McAfee both made statements similar in regards to obtaining blackmail DATA or compromising DATA which will permanently embarrass the corrupt actors of the United States Government which has been infiltrated by Corruption, Pedophilia and child abusers, and law breakers. Let’s compare:

Right before the election results in the war between the Trump Presidency and illegitimate President Joseph Biden.

Did John McAfee gave a copy of this encrypted DATA, this blackmail DATA, this compromising political corruption DATA to Attorney L. Lin Wood??????

Even though this is an opinion article, Attorney L. Lin Wood is free to make a response to this and we will post it. Lin Wood can admit whether this “blackmail videotapes” was actually what John McAfee had obtained and which was why the Feds wanted him imprisoned or dead.

There was also net rumors of a Tweet, which cannot be located on the official McAfee account on Twitter, whether it was censored quickly before it could be archived or was a fake Tweet to throw everybody off the scent of whoever killed McAfee if it wasn’t suicide. I will upload and post it here:

A Twitter user named John C. Silva, NBCT, claimed that John McAfee never tweeted about the 31+ terabytes of possibly compromising or blackmail DATA/information. However this is on his OFFICIAL TWITTER ACCOUNT, and can be accessed by either the Wayback Machine or his original Twitter account. If it gets censored by Twitter, it is still on the Wayback machine and proves it’s authenticity.

The lie which is verified by Justice for Brian D. Hill of USWGO Alternative News blog, John Silva claimed that “There is zero evidence McAfee ever tweeted this, but adding a tiny bit of credibility is a tweet from two years ago where he mentions having 31TB of files. 2/“. Now he doesn’t post a link to McAfee’s original Tweet but shown a Screenshot of his original verified Tweet in the history of McAfee’s archived tweets. That is to make it appear that John McAfee never tweeted about collecting files on corruption in Governments and having this blackmail DATA aka incriminating DATA. His tweet was from his original Twitter account and completely proven John Silva lied in at least that one statement on Twitter. Not just one Tweet from McAfee on the incriminating DATA of 31+ terabytes, but he responds to another Twitter user agreeing that he had already had it encrypted and shared it with a fail-safe encryption key if something happens to him.

So John C. Silva lied about John McAfee never tweeting about that. In case John Silva covers his butt and deletes his Tweet with his lie on record, it has been archived at The Wayback Machine. Maybe John Silva told the truth in other statements or claims, but in at least that one statement on John McAfee not tweeting a specific Tweet that is verified to existing in its entirety, John Silva had LIED, LIED, LIED, disinformation, LIED. John C. Silva also has a right to respond to this opinion article. Upon emailing us his comment and verification that it is the “John C. Silva” and not an imposter, we will post it here in this very article for everybody to read.

Now the question is whether Attorney Lin Wood tweeting about having this encryption key or password of compromising or incriminating DATA could have ever received this DATA from John McAfee before John McAfee was murdered. Maybe John McAfee gave a copy to the so called proclaimed “Lizard Squad” group which Lin Wood had mentioned?

Here is a Tweet from John McAfee warning that he would be suicided like Jeffrey Epstein, meaning he was claiming that he will be murdered and it be made to look like a suicide. He was able to tweet this while from Jail. Because his charges never involved computer crimes, likely the Jail allowed him to still use the internet. You can ask the Warden for things like that depending on your charges as an inmate and at their discretion they can allow specific inmates to use the internet depending on circumstances and issues. For his safety, he should use the internet while in Jail. Of course now he is dead. So it proves why inmates in Jails should be allowed to use the internet in cases of future murder by guard or murder by inmate. Especially inmates paid off to kill another inmate.

So now it is clear that John McAfee was highly likely murdered.

The only question that remains to be seen is simple:

Lin Wood claimed the “Lizard Squad” retrived these so-called blackmail videotapes which incriminate possibly Federal and State judges and politicians. Did some hacker group or some other group really just happen to copy, download, or just retrieve these blackmail videos or did John McAfee obtained those videos as a computer software engineer through backdoors? John McAfee claimed to have clearly had 31+ terabytes of some form of blackmail DATA, incriminating information which affects the CIA and the Federal Government of the United States of America, maybe the State and Local Governments even. Videotapes would be one of the most largest of DATA taking on hard drives or any storage media. Videos would be the largest, photos and music can also get pretty large. 31+ terabytes of DATA is simply a lot of incriminating DATA and would take hundreds to thousands of dollars to store locally. You would need either a supercomputer or some mass storage media that can store up to 30 TB or over in DATA. Backup copies in case of DATA corruption.

Was he ever in contact with L. Lin Wood? Did McAfee’s DATA include anything such as child rape and murder videotapes of judges and politicians? Did Lin Wood receive copies of this stuff before McAfee died?

This article shall leave this to the imagination until all the answers come out and the truth revealed.

One thought on “John McAfee’s encrypted DATA, possibly the same Blackmail material mentioned by Attorney L. Lin Wood about Judges and Politicians being blackmailed with CHILD RAPE and MURDER (Op-Ed)”