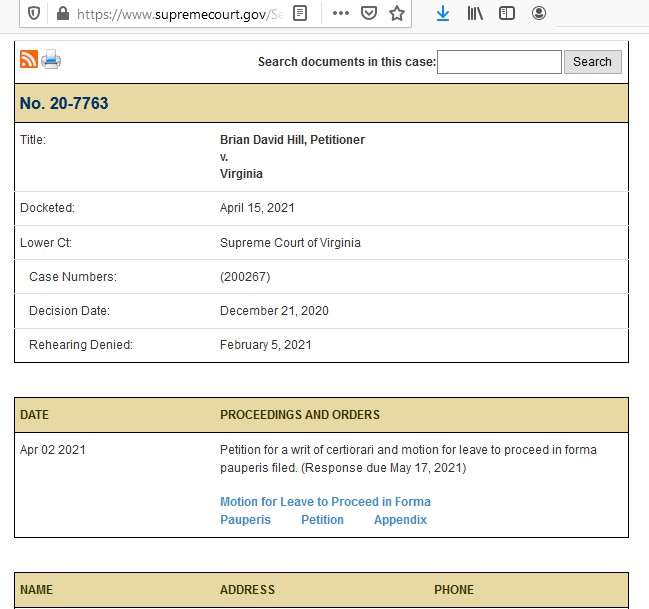 USWGO alternative news reporter Brian D. Hill’s third petition in the U.S. Supreme Court has been docketed and filed. This is regarding the Supreme Court of Virginia throwing out Brian’s appeal of his writ of habeas corpus petition being quickly denied because Brian was not in state custody at the time he filed his petition. Brian asserted that he has a constitutional right to prove factual innocence to his state charge and wrongful conviction. He said that decision by Virginia’s highest court conflicts with the SCOTUS decisions that “actual innocence” can overcome any procedural bar or defect. It conflicts with well-settled issues of law and puts America backwards sense the Innocence Project had won a lot of cases of those actually innocent of crimes they were convicted on and were exonerated by DNA evidence.

Brian had filed this SCOTUS petition along with multiple petitions in the Virginia Appellate Court all asserting that he was not medically cleared as proven by medical records published in the record, and asserting that the Commonwealth had allowed blood vials to be destroyed and lie about Brian being medically and psychologically cleared when the evidence conflicts with all of it. Brian even filed evidence in the Virginia Appeals Court of the past attempts of anonymous assailants sending threatening emails or text messages to Brian and any of his defense lawyers or witness lawyers.

Brian is fighting as hard as he can and will expose Glen Andrew Hall the corrupt Commonwealth Attorney as well as Martinsville Police Department for the way they had treated Brian in 2018 and 2019. They could care less about his severe medical health issues such as type 1 brittle diabetes, Obsessive compulsive disorder, and Autism spectrum disorder. They both refused to review over any evidence that was mailed to them. Brian is on a war path in the legal system by filing nothing but the truthand evidence, as well as challenging all frauds. That is despite it being corrupt because blogs like “Justice for Brian D. Hill of USWGO Alternative News” are still online and are able to expose the rampant judicial corruption going on in his case and throughout America. The judicial corruption documented in Brian’s cases is the corruption of the Circuit court of Martinsville, the Court of Appeals in Richmond may be corrupt, and the state Supreme Court. They are all corrupt. They could care less about Brian’s actual innocence and want him held hostage to being extorted by legal fees and want him permanently convicted of indecent exposure to falsely paint him as a pervert to justify doing even more horrific things to Brian in the future. They are working with the corrupt Feds including corrupt U.S. Marshals to keep Brian in the system for the rest of his life, even if he is not guilty. They are out to get him for operating USWGO alternative news from 2009 to 2012. The Obama Administration was out to get Brian for being alternative media and were out to get him ever since. The O-Biden Administration is just an extension of the corrupt Obama Administration on steroids. They don’t ever want Brian Hill’s character revived after being character assassinated long ago. Just claim he is a pervert and destroy his character rather than murdering Brian and causing him to be a political martyr. They want him to look as perverted as they can make him, like a scarecrow. They want to keep him off of the internet so that they can attack him, extort him, blackmail him by setting him up, threaten him, and lie about him. They cannot do that without an excuse and setting him up with child porn then poison him with carbon monoxide till he was out of his mind then get him on indecent exposure. It is the perfect storm being waged against USWGO alternative news, against Brian D. Hill. They never want him to ever come back, ever. They will fight him until Brian is six feet under, deceased. This doesn’t just happen to black people, this happens to every skin color on the planet. Injustice and judicial corruption can happen to anybody and everybody.