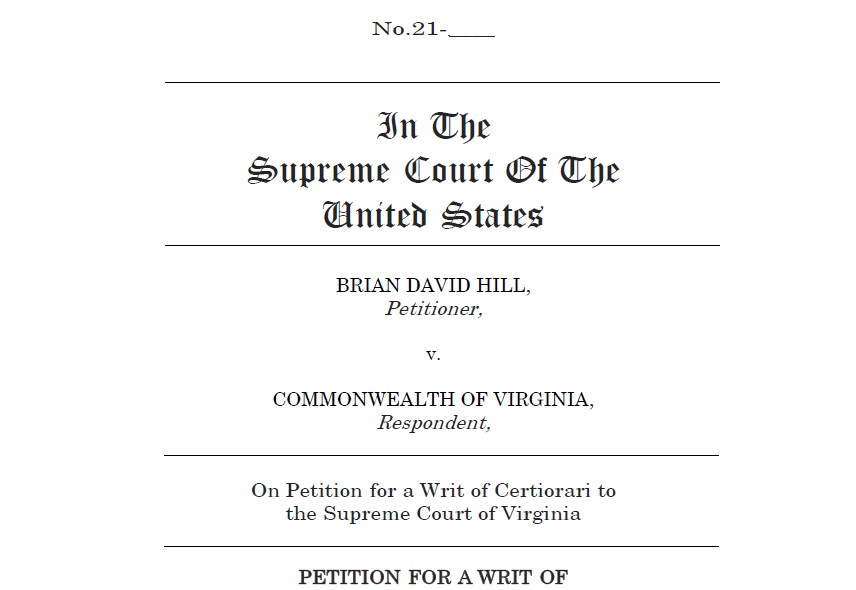 Brian D. Hill, formerly of USWGO alternative news has filed his third U.S. Supreme Court petition for Writ of Certiorari asking SCOTUS to protect his actual innocence rights in his State criminal case. As well as filing a “Petition for Appeal” for the Court of Appeals of Virginia to undo a decision to throw out a writ of error coram vobis/nobis. Brian had promised President Donald Trump and the American people that he would continue fighting to prove his innocence until he is permanently acquitted of both his erroneous state charge and his Federal conviction which We-are-change did a news report in 2016 saying that Brian was also innocent of that charge. Brian made a recent statement by audio recording in regards to proving his innocence to his charge of indecent exposure at night due to severe carbon monoxide gas exposure and poisoning in his blood which likely caused tachycardia which was proven from the Hospital record dated September 21, 2018 [see page 52 of the document linked to see the tachycardia readings. It said “04:09 BP 124 / 86; Pulse 119“, “05:01 BP 119 / 80; Pulse 106“], the day he was charged with the crime. The police officer admitted in Federal Court on September 12, 2019 that they never actually checked his medical records prior to filing an affidavit in Officer Robert Jones’s criminal complaint in Martinsville saying that Brian was medically and psychologically cleared when he was charged with indecent exposure. That statement has been proven false, which is perjury of officer Robert Jones of Martinsville. Brian is keeping his word to Donald Trump and to the American people and even to Roger Stone. Whether Brian gets a pardon or not, Brian has proven his actual innocence and had proven his confession was false in the town of Mayodan. Brian said in his statement that anybody calling him a “pervert” in any comments and claim that he “confessed” “are morons” and do not understand the truth or are probably Federal Agents posing as hate commenters but are liars. Actual innocence should mean something to every American and advocate for true American justice in our Constitutional Courts. The evidence published by We-are-change and Activistpost outweighs his false confession in the town of Mayodan in 2012, and warrant federal acquittal or executive pardon. That was why Brian pushed so hard for a presidential pardon asking the President to file a full pardon declaring him innocent of his charge.

Here are the documents provided by Brian’s mother:
4482f40bb73140bf880793d15d3d8d40_Redacted.pdf – redacted mailing label (void/redacted so that it can legally be released as evidence) with certified mail tracking number which is proof of filing to SCOTUS
SCOTUS-Pet-4-1-2021.pdf – Petition for Writ of Certiorari filing that had been mailed on April 2, 2021. This is Brian’s third petition case to SCOTUS.
AppealPet4-1-2021.pdf – Petition for appeal in the Court of Appeals of Virginia in regards to his writ of error coram vobis/nobis as some called it vobis and some call it nobis but have two different distinct meanings.
Xfinity Connect VACES eFiling submission for Brian David Hill v_ Commonwealth of Virginia has been reviewed and accepted Printout-April-1-2021(2).pdf – Approved and accepted for filing and was filed with the court.

This is the third petition for Writ of Certiorari. The second one was filed by attorney Edward Ryan Kennedy of West Virginia but the Supreme Court refused to grant that petition, as well as the first petition asking for relief in his fraud upon the court mandamus petition in the corrupt fourth circuit U.S. Court of Appeals. Brian is asking SCOTUS to reverse the decision of the Supreme Court of Virginia throwing out his actual innocence claims under a technicality that he was not in a state prison or on state probation at the time he filed his writ of habeas corpus petition which is moronic to convict an innocent man and leave him with no avenue to undo his wrongful conviction when he is clearly innocent of the crime as charged. What does it matter if Brian was in a state prison or not at the time he claimed actual innocence???? When your innocent of a crime as you are charged with the crime you are innocent of, you have every right to set the record straight and prove your innocence so that society doesn’t look down upon you because your not even guilty. Brian has every Constitutional right and moral obligation as a Christian to prove his innocence and set the record straight and not have his merited claims thrown out on stupid technicalities. It is a stupid technicality to not allow a person to prove his innocence to a crime he was convicted on because of simply not being in prison at the time of filing when they know that prison makes it almost impossible to prove innocence because of their almost-daily shakedowns of prisoners and their cells as well as strip searches, and searches and taking papers by simply declaring it contraband when it isn’t to make it nearly impossible to prove innocence while in a prison facility. This is wrong and Glen Andrew Hall the corrupt Commonwealth lawyer of Martinsville clearly knows that. Brian should be acquitted by Glen Andrew Hall, as he should only move to convict a guilty person, period.

“Had Infowars stuck by me, they didn’t, they turned their backs on me. That’s why I am a QAnon person through and through, even if QAnon is discredited I am still going to be QAnon. I am still going to be a QAnon ally or supporter because, I don’t ever want to…Alex Jones he’s a miserable man, he’s a horrible man. He left me (emotional) as an ally. Alex Jones turned his back on me when I needed him the most, when I was sitting in maximum security jail every day Alex Jones wouldn’t do anything for me. And I wish I could tell Roger Stone don’t even get involved with Alex Jones but I am sure he has his reasons. I am not mad at Roger Stone, I am not mad at him if he is an ally of Alex Jones. The man who the people who turned their backs on me. And got me and made me into a sex offender by turning their backs on me. If they had not done that and I had gotten a lawyer I would have been found innocent. I would clearly have been found innocent.”

30 minutes into the audio file and that was a segment of what Brian D. Hill of USWGO alternative news had said. – April 1, 2021