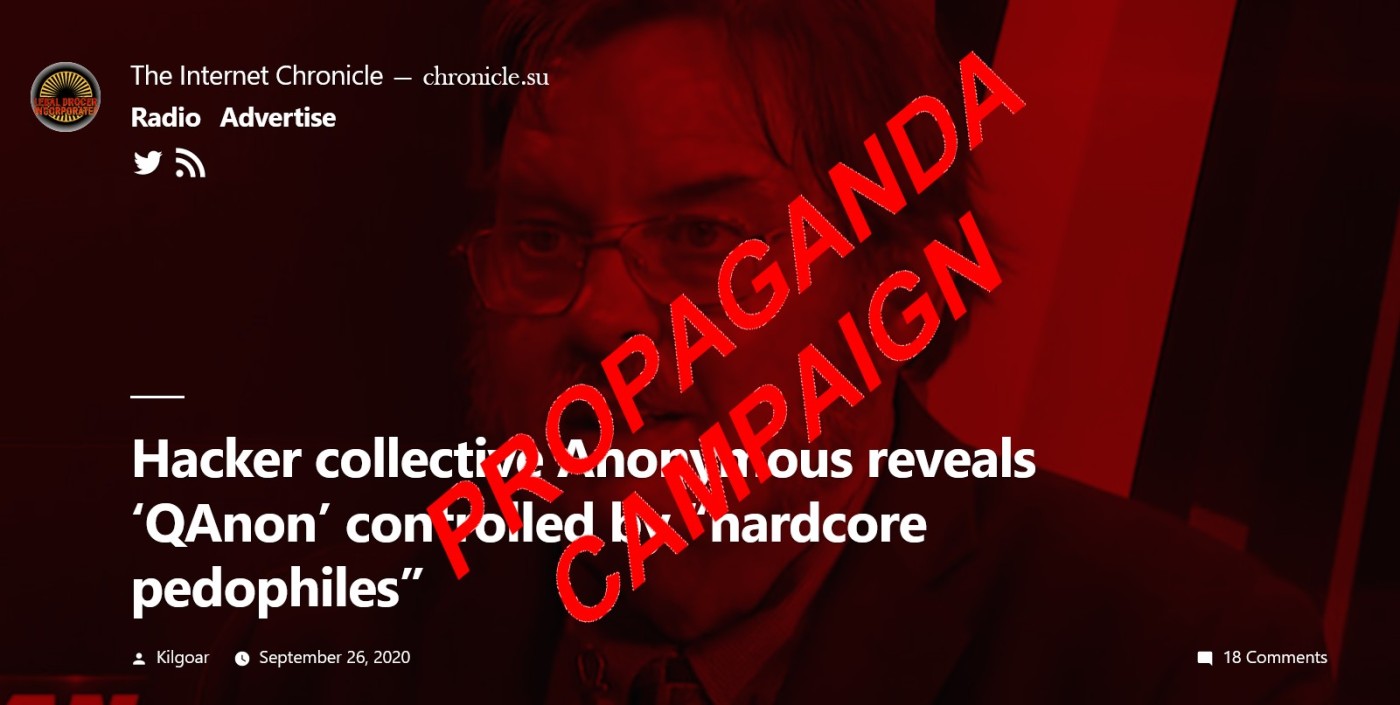 A news hit piece type propaganda was recently released and published online entitled “Hacker collective Anonymous reveals ‘QAnon’ controlled by “hardcore pedophiles” – The Internet Chronicle“. It is attempting to insinuate that QAnon is full of pedophiles at the top of the group, that of course comes out after a year ago when Alex Jones had also claimed QAnon may had been responsible for sending him child pornography files through an email address “qanon@onionmail.info”.

The campaign blog of Justice for Brian D. Hill of USWGO alternative news as well as Brian D. Hill and a guy nicknamed “Ben Franklin on FederalJack had tried to warn people that anybody can use child pornography as a weapon to politically destroy somebody and later on [due to the Jeffrey Epstein revelations] also possibly to blackmail and compromise people.

Anyways back to QAnon, so now the attempt to frame them up with child pornography had failed last year with the attempted frame up of Alex Jones. See some of the images and the article published last year warning of the frame up attempt on Alex Jones and QAnon by an unknown assailant creating a “qanon@onionmail.info” email address who the US attorney office through the FBI and Alex had both claimed try to send child pornography to Alex Jone’s email account.

Interesting that John Durham had signed his name to that letter, is that the same investigator US attorney Durham that was writing the Durham report and was rumored to be gearing up for mass arrests of the deep state swamp????????????

First of all, visit QAnon.pub for yourself and search up “onionmail.info” in the search mechanism. Of course there is NONE.

The propaganda piece by Internet Chronicles is meant to attempt to discredit QAnon or cause any newcomers to consider running away from QAnon with such mere allegations of pedophilia, ignore them, and making people want to stay away from QAnon. Once the allegation of pedophilia comes upon you, your life and your family and your spouse as well as your reputation are ruined forever, even if you prove your innocence or proven that you were never guilty to begin with and was fraudulently accused.

QAnon has been known to release Q Drops that expose pedophilia and actively works against the pedophile rings that blackmail top politicians like former President William Jefferson Clinton [Bill Clinton] as well as Prince Andrew and possibly judges or even Supreme Court justices.

QAnon drop #4788 said at the bottom of the two images:

Those who scream the loudest…
Q”

The pedophiles seem to really hate QAnon so why would the QAnon posters team or people would even be associated with such filth and nasty sick behavior?????

QAnon has a lot of Q drops against Jeffrey Epstein. QAnon really seems to be at war with the pedophiles, the exact opposite of what Internet Chronicle and it’s “anonymous” hacker “collective” sources is claiming. Of course the “collective” can also refer to the pro-communism collective aka communes who believe in community governments running the lives of it’s citizens as a police state under the guise of a nice looking nanny state.

Look really close at the website favicon/icon of “Internet Chronicle” referring to the icon of the website or webpage. The icon that appears on the web browsers and even favorites lists stored on web browsing history.

Yes why would a news platform such as the “Internet Chronicle” attacking QAnon with their special propaganda hit-piece have a hammer and sickle a COMMUNISM SYMBOL as a website favicon/icon?????????

Propaganda political hit pieces are usually created and then disbursed to the masses is what normally comes out before an invasion or declaration of war whether it’s a silent declaration of war or open declaration of war. The attacks against President Donald Trump and QAnon are escalating because of the “Red October” and the deep state is planning or had already orchestrated a declaration of war against QAnon possibly with violent hit teams, ANTIFA/BLM and hit squads that will shoot actual metal bullets into their targets, CIA or NSA possibly sanctioned hit teams depending on the infiltration by the outside forces. Either hit teams or just have them look like they had all committed suicide aka Arkancided. Like what had happened to Seth Rich or Andrew Breitbart.

So why would “The Internet Chronicle – chronicle.su” publish a hit piece against QAnon calling them all career pedophiles and yet they have a favicon/icon for their website showing a hammer and sickle in the way of the communism symbology. QAnon said that symbols will be their downfall. The pedophile rings must be desperate to arrest QAnon and bust them up with fake pedophile allegations and turn any new people away from them and cause loss of morale. Ruin QAnon so that the deep state swamp will also ruin President Trump too with pedophile allegations and then anybody who resists the deep state shadow government and their “ShadowNet” gets framed and falsely accused, then descends into RUIN…………