Hello everyone, It is time to go ahead and show my email to the new U.S. Solicitor General Jeffrey Wall about the Supreme Court case of Brian Hill v. United States Corrupt District Court for the Middle Communist District of North Carolina. Also don’t forget OFFENDER Anand Prakash Ramaswamy who is at this point proven guilty of defrauding the court in Brian Hill’s case and Brian must be permanently acquitted or given a pardon of Actual Innocence by President Trump.

The Solicitor General needs to pick up the envelope on Brian’s filed letter to all of the justices in the Supreme Court consenting to the Amicus Curiae and asking the Court to extend the time to file an Amicus Curiae by any lawyer or law professor to file with the Supreme Court in support of his petition for Writ of Certiorari.

Jeffrey B. Wall,
You need to pickup the mailing.
https://tools.usps.com/go/TrackConfirmAction?tRef=fullpage&tLc=2&text28777=&tLabels=7019-2280-0000-8211-8162%2C
July 11, 2020, 10:50 am
Available for Pickup
WASHINGTON, DC 20530
Your item arrived at the WASHINGTON, DC 20530 post office at 10:50 am on July 11, 2020 and is ready for pickup.
It is your duty to discharge the duties of your office, and laws should be enforced. Fraud upon the court should not be tolerated by your office or any office of law enforcement. Fraud should be discouraged in every court. Please make sure of that. God bless you.
Where we go one, we go all,
QAnon
Best regards,
Stanley Bolten
WWG1WGA
Sent with ProtonMail Secure Email.

What does that email above tell you?

If he knows about QAnon or is part of QAnon, then he knows exactly the deal with Brian Hill. Brian Hill must be acquitted at once, his conviction vacated and his probation violations vacated as well since both violation charges were based upon his Autistic behaviors caused by Autism Spectrum Disorder, he had no intent to violate his supervised release. One was that he was a victim of carbon monoxide poisoning and the other was over an autistic meltdown. Brian never should have been violated at all. Frauds do not right the perceived wrongs by the Government. Meaning if the Government feels that Brian is a horrible rotten criminal that is a danger to society, then they need to only tell the truth with real evidence and not engage in fraud to successfully prosecute and convict him. Frauds is not how to win cases. Frauds should never be used to win any criminal or civil cases. It is unethical and violates the rule of law. It goes against common sense, it goes against logic, it goes against science. It violates the Ten Commandments of thew Bible, Thou shalt not bear false witness. If they believe that Brian may have sinned or even sinned in a bad way, then sinning to stop a so-called sinner only increases the sin.

This Solicitor General should read Brian’s letter carefully then he needs to call for investigations of both a criminal, disability rights, and civil rights nature and find out if Brian was telling the truth this whole time or lying a bunch under oath which would not make any sense. Brian already got time served prison sentence. Why would Brian risk that by filing affidavit after affidavit claiming innocence and proving fraud? Why would his mother Roberta Hill and grandparents Kenneth and Stella Forinash all risk perjury charges for their family member who received a prison sentence of time already served which many inmates would snitch and kill for?

Think logically, Brian is INNOCENT, Brian has begged QAnon for help and he still needs their help in investigating his case and exposing the truth when appropriate under the laws of the land.

No real pedophile would ever consider bucking against a prison sentence of time served. Not even serial child molester Jeffrey Epstein bucked his sweetheart plea deal where he gets work release during incarceration when no real sex offender ever gets work release while in custody.

Whatever opinion, stigmatization, or emotions you feel over Brian’s federal criminal charges is irrelevant and not logical. Any logical lawyer knows and understands that Brian is innocent and was a victim of multiple frauds upon the Court, Constitutional violations, and Deep State sabotage and attempted murder. 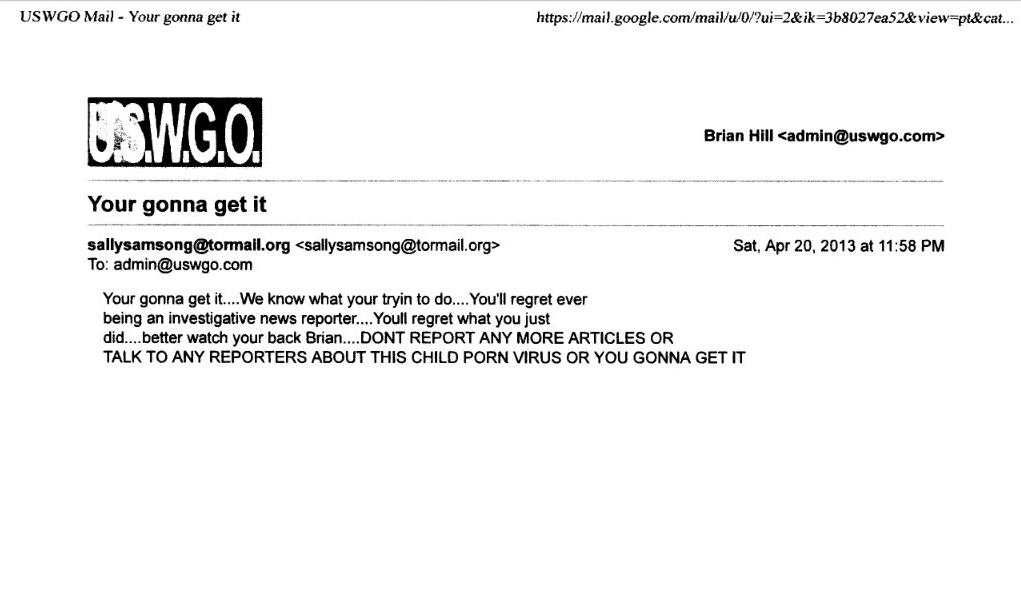 Additional evidence that supports Brian’s claim of being setup is the fact that his computer was downloading the image’s of child pornography while in the custody of the North Carolina State Bureau of Investigations (SBI) in August 2012 and 2013.