The federal judicial CORRUPTION is out in the open now, in FULL FORCE. Brian D. Hill [USWGO alternative news] had filed a motion asking for correction of the transcript filed by court reporter Briana Bell.

I had even had the opportunity to also email her as well, and none of us ever thought that this court reporter would omit information from the transcript. It appears that they are trying to make Brian look like a liar in his federal criminal case by omitting information that Brian has claimed would have been in the transcript but magically it isn’t in the transcript. 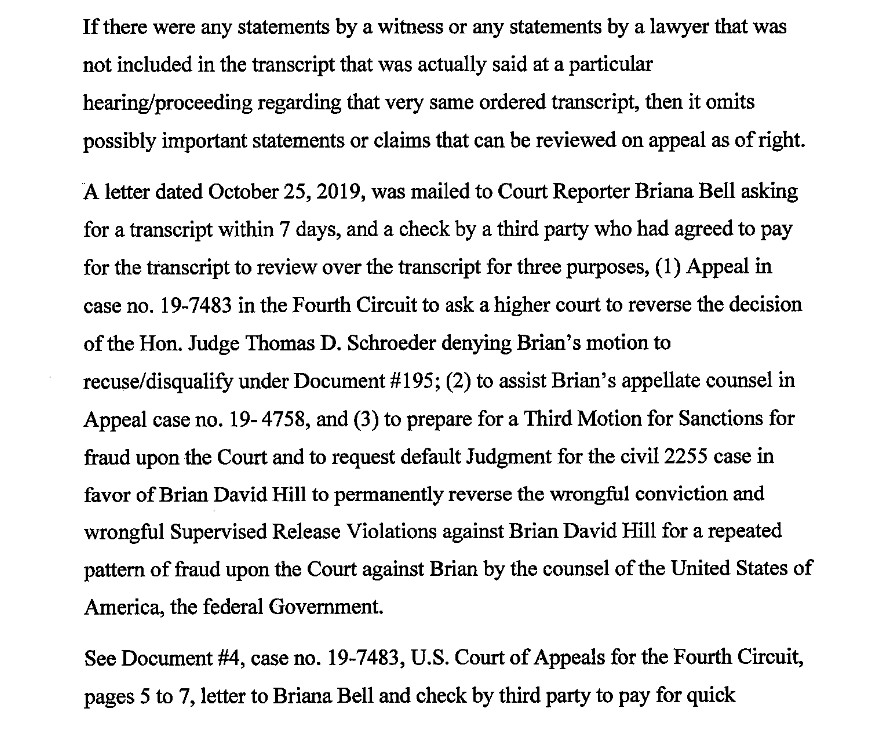 From the affidavits of four witnesses, and asserting other witnesses are available upon request, the proof is in that Brian was a victim of yet another act of federal court corruption. If they had done this to Brian. then judge Thomas D. Schroeder is doing this to other people. That is why Brian’s case is very important to examine and review here. Roger Stone’s case is yet another example of federal judicial corruption in a completely different district.

In fact see these few articles bout Roger Stone being a victim of federal judicial corruption, the American people are finally waking up to not just Brian’s wrongful conviction but are seeing it happen to others in different jurisdictions.

Anyways, it appears that the DisHonorable corrupt federal rat judge Thomas D. Schroeder had decided to pull a “judge Amy Berman” on Brian and start getting his court reporter Briana Bell in Winston-Salem, North Carolina, to omit important information from the transcript. Then they can use that to make Brian look like a liar, delusional, or both. However, not so fast. Four affidavits have been filed in the case bringing up what was omitted from the transcript. There was also a screenshot and printout of an email that was sent to Eric Clark, but there was a page that may be missing as the document referenced in the email does not show up on the federal court record. Regardless, a full investigation should have been conducted into Briana Bell to determine if she was manipulated by judge Thomas D. Schroeder of Winston-salem, North Carolina, to doctor up transcript by omitting information which would have aided Brian in showing that he wasn’t being obscene and had no sexual intent. This statement from Martinsville police sergeant Robert Jones had been omitted from the record. The federal court wants to sexualize Brian’s autistic behaviors so badly, that they are willing to remove any statements from the official court transcript that would be in Brian’s favor.

It is clear that the corrupt U.S. attorney Anand Prakash Ramaswamy isn’t the only one breaking federal laws here, but also the corrupt federal rat judge Thomas D. Schroeder. It is time for him to be DISBARRED.