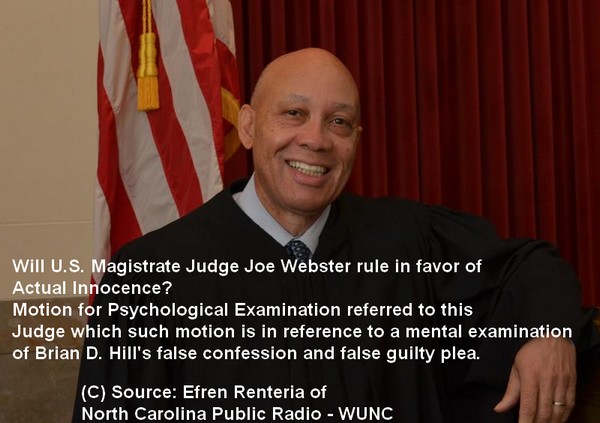 U.S. Magistrate judge Joe Webster from the Durham, North Carolina has gone to the dark side, defending the corrupt and evil chief judge Thomas D. Schroeder, the king rat.

When you read his “Order and Recommendation“, it sounds almost like a piece from the U.S. attorney’s office, as if they were writing it for him. What a puppet! Magistrate judge Joe Webster is basically a controlled political puppet for the dishonorable Judge Thomas D. Schroeder. They don’t care about Brian’s autism. They don’t care about Brian’s actual innocence. They don’t even care about the merits, even if the judge says Brian has any merits, the court would still deny them. Judicial tyranny. See the report archived on this blog too.

So even if Petitioner Brian D. Hill had shown merits to his actual innocence claims or any of his claims, “The Court…” “would deny them”. So Brian’s actual innocence doesn’t matter anymore under this judicial tyranny. Not being allowed to his criminal case discovery material (Brady material) was also not considered any issue in that federal court.

Most of his order and recommendation is all about highlighting and reiterating over and over again that “Brian plead guilty”, and “Brian admitted to it”, rather than examine his confession statements being false upon a cross examination, which is a false confession statement. His autism plays a role in Brian giving false confessions and misleading statements. See Dennis Debbaudt’s law enforcement and false confessions report also here. That report was cited in his 2255 case as evidence that his autism had played a great role in Brian’s false confession, but the U.S. magistrate judge ignores it and disregards it all. Every piece of evidence ignored and then bashes Brian over his false guilty plea multiple times throughout his order and recommendation.

Look what they are doing to Roger Jason Stone in the federal court in Washington, DC. They are giving him a kangaroo court style jury trial, with Obama’s hanging judge, as Alex Jones had said. If they can give Roger Stone a kangaroo trial and which he has a great chance of losing the jury trial, then Brian never would have won in federal court either had he not taken the guilty plea. Because Roger Stone refused to take a plea, they will railroad him like they did with Brian David Hill. Then they use the guilty plea against you to refuse to let you prove actual innocence, even if a guilty plea can still be overturned on the ground of being misled by a fraud upon the court and on the ground of ineffective assistance of counsel. Judicial tyranny in our federal courts is a reality now. Federal courts are no longer places of justice anymore, they are all about imprisoning political enemies, political targets. That is unfortunate.