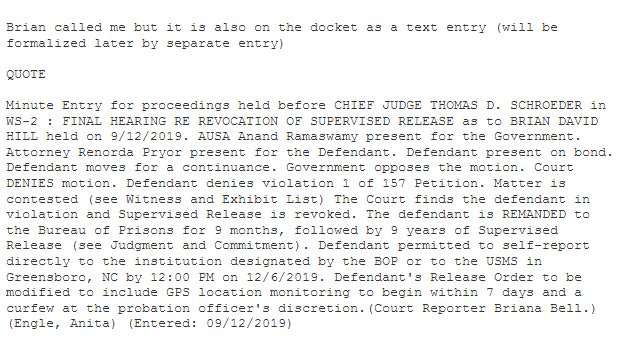 When it rains it pours. Despite Brian filing a letter with evidence to Martinsville [Virginia] police department concerning Brian D. Hill [USWGO alternative news] being a victim of carbon monoxide poisoning. Despite the evidence and case law concerning his legal innocence, that Brian had not been obscene under Virginia law and was a victim of carbon monoxide. Corrupt federal judge Thomas D. Schroeder of Winston-Salem [Wonder about the Salem witch trial? Brian was politically burned at the stake in Schroeder’s kangaroo court system] appeared to have ignored all evidence and ignored Brian’s interlocutory appeal, and then ordered the imprisonment of Brian David Hill for 9 months [likely the maximum statutory term] and additional 9 years of supervised release added on to his sentence.

A source of mine, who had been in contact with Brian apparently by phone conversation, brought up about Brian’s imprisonment under corrupt RAT judge Thomas D. Schroeder. He will be repeated to both the U.S. military and other patriots as I have seen evidence of his criminality. His premeditated order under Dkt. #180 where he wanted Brian in prison and revoked his probation turned out to be true. The corrupt RAT judge [“rats PANIC in DC” – Quote from Qanon] Thomas D. Schroeder had filed a document back in June 26, mistakenly or on purpose by an insider of the federal court trying to warn Brian of what Judge Shroeder had wanted to do to him for trying to rebel against his false guilty plea. That document said that Judge Schroeder had already wanted to find Brian in violation based on a future court hearing originally set for August 9, 2019. Because of the continuance filed by Brian’s lawyer, it was pushed off until September 12, 2019, one day after the 18th year anniversary of the September 11, 2001 terrorist attack in New York City. 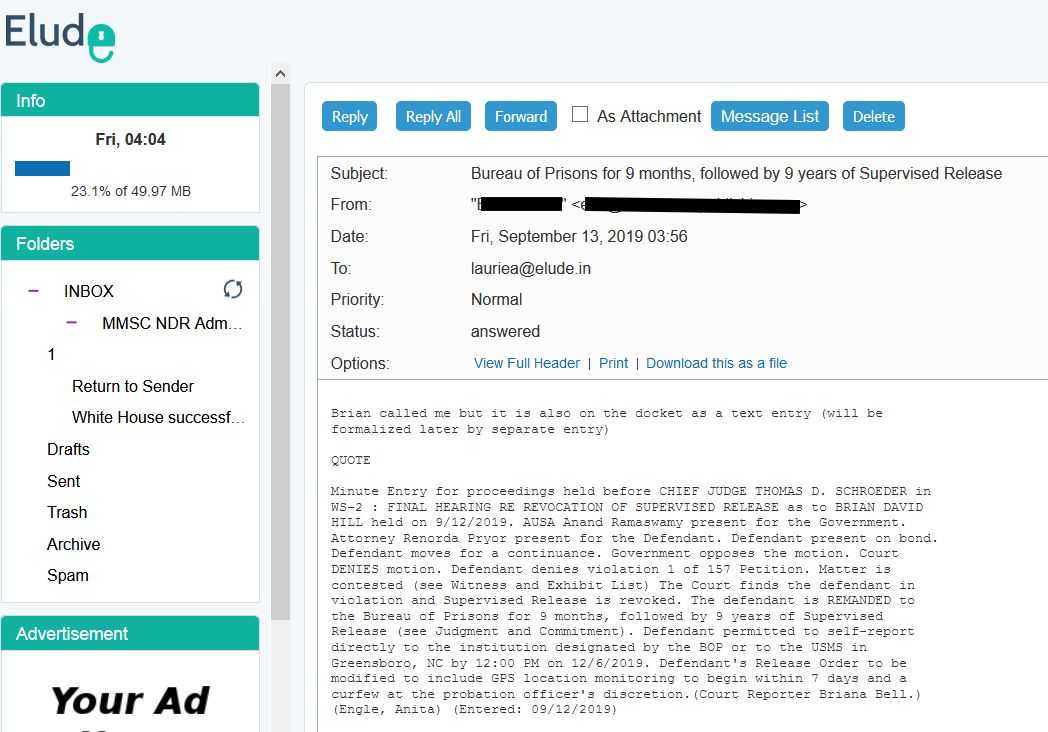 Everybody may need to start sharing Brian’s video asking Qanon or Trump for help. The same source emailed me the documents from PACER. It appears that Brian’s two notice of appeals, Brian has put the words of Qanon in his court filings and have requested help from President Trump for a full pardon of innocence and requesting Qanon to help him again. 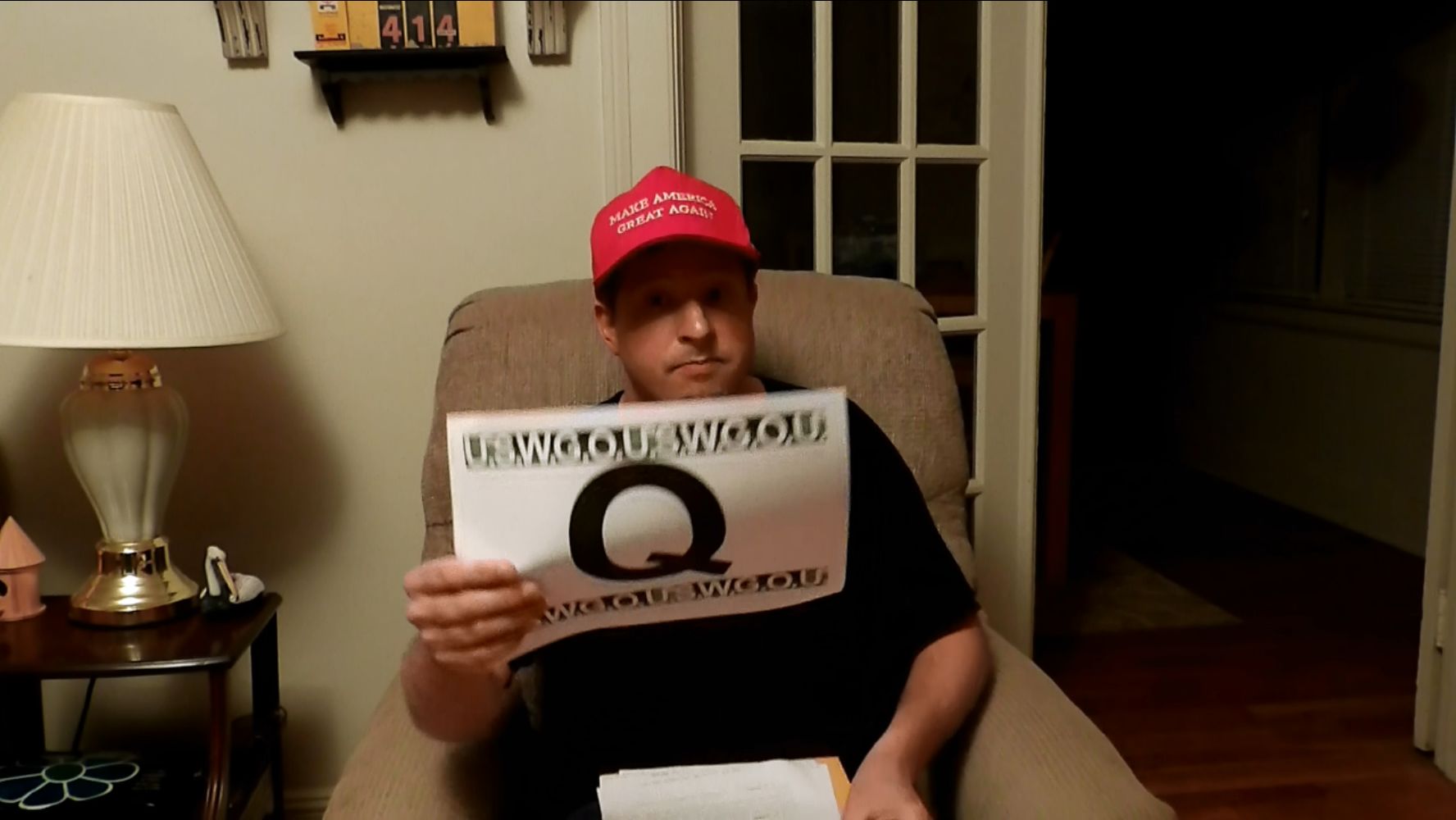 Click the image or link above the visit the Bitchute video.

So the Judge had decided to fulfill his promise of a premeditated threat against Brian and appeared to have terrorized his family. It is time to call for the arrest of Judge Thomas D. Schroeder for high treason. Winston-Salem cannot allow his judge to continue violating Brian’s constitutional rights. Another email that I had received from this source explained that any attempt to revoke Brian’s supervised release during Brian’s state appeal process and mandating that Brian surrender to a federal prison is an error of law, an abuse of discretion, and is LEGAL TERRORISM against Brian. Judge Schroeder is a LEGAL TERRORIST engaging in lawfare for the corrupt Assistant U.S. Attorney Anand Prakash Ramaswamy who has committed many crimes and acts of LEGAL TERRORISM against Brian and his whole family and friends including Susan Basko, an attorney. Time for Judge Schroeder and Ramaswamy to both be indicted, arrested, and thrown in prison for their crimes and their treasonous behavior.

Here are his appeal documents emailed to me from my source:

Brian sends a S.O.S. on federal court record asking QANON to help him. Brian is in DANGER!!! 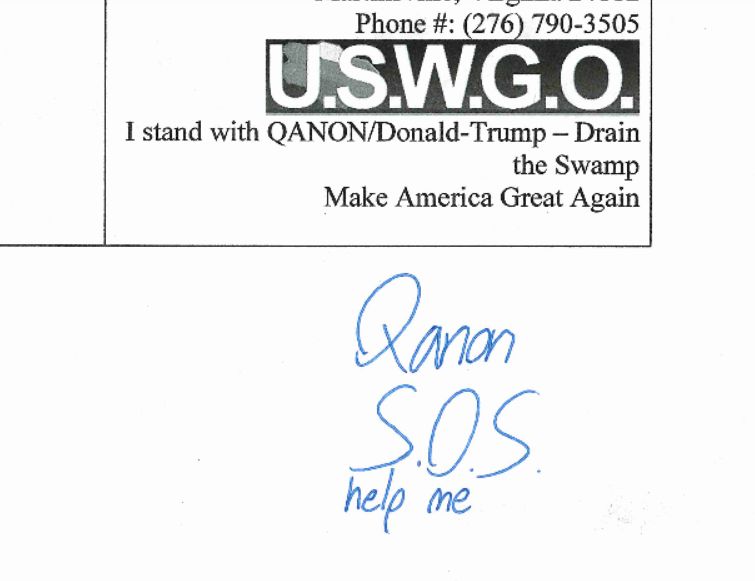